It has been placed upon me to continue the Roundtable, something I do with great honor and pride…. mostly for visits though.

After such a performance on Saturday, it seems like a very good time to gather together and gauge the feelings of the Alabama fans and bloggers. We won a game that few thought we could win, something that has to put a smile to everyone’s face. We haven’t had a time to smile like this since last year’s Tennessee beat down, so enjoy it. 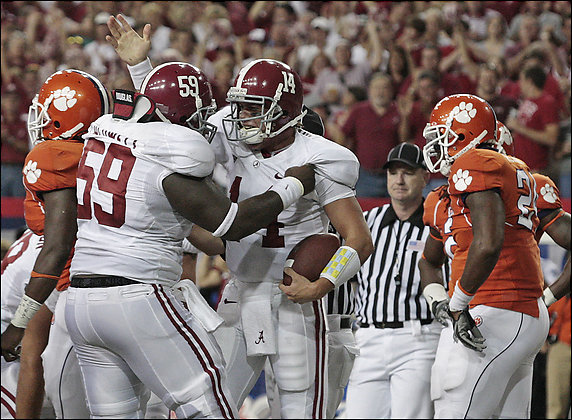 Good times for one and all… in Crimson

Since it is rather short notice due to scheduling, I will understand if others cannot participate this week. If you can’t, we’ll all understand. Hopefully, we’ll be able to keep things rolling on an continual basis.

1) Due to that colossal victory over a Top 10 team in Clemson, Alabama has shot up in the polls (13th in AP and 17th in Coaches). What are your feelings on Alabama’s current position in the polls? (Too High? Too Low? Just Right?) Expound on this if you can.

I would be happy with 15th place considering we’ve only played on game, so I guess it evens out when you consider the two positions in the polls. We need to play some SEC football before I start complaining about being ranked “too low”.

Early season poll rankings are starting to mean less and less. If you don’t like where your team it today, you certainly have plenty of opportunities to gain some ground. Just look at the 2007 polls, the most fluid of my lifetime. It seemed like a top team was falling every week. So don’t panic, because this thing will probably be very different come October.

2) We’re all a little shocked at how much Alabama dominated that game on Saturday. What aspect of the game did Alabama control that shocked you the most?

Even though I created this question, I have to admit it seems a bit open ended considering how well things went on Saturday. I guess my one shock was our ability to not crumble after a few big plays by Clemson. With that Ford catch, and later the Spiller TD,  thought it would become a very close game that we might lose. But, we responded in a manner unlike 2007 with our ability to finish the game. The only question now is can we avoid the late season collapse that has mired us in mediocrity for the last few years?

Think about it; we’ve actually had some pretty respectable performances until the end of the season year after year. Even though that is when we play LSU and Auburn, we’ve still had the likes of ULM and Mississippi State to deal with (two non-juggernauts of football). We’ve got to stay tough, and I think this year we just might do it.

3) Name your player of the game on Offense. Also name one on Defense.

On offense, you have to give it to Mark Ingram. The Freshman Running Back was the rookie of the weekend if my opinion, gaining a ton of yardage against a highly vaunted defense from a year ago. He’s got the speed, toughness, and plowing ability that you need in an SEC RB.

on defense, I’d go with Terrance Cody, as I am sure most of you will. He’s 360+ lbs, and can still do a 360 degree slam dunk. With his agility, he created tons of problems for Clemson last Saturday. If we are to have a big time D-line this season, Cody will be the key kog for Alabama.